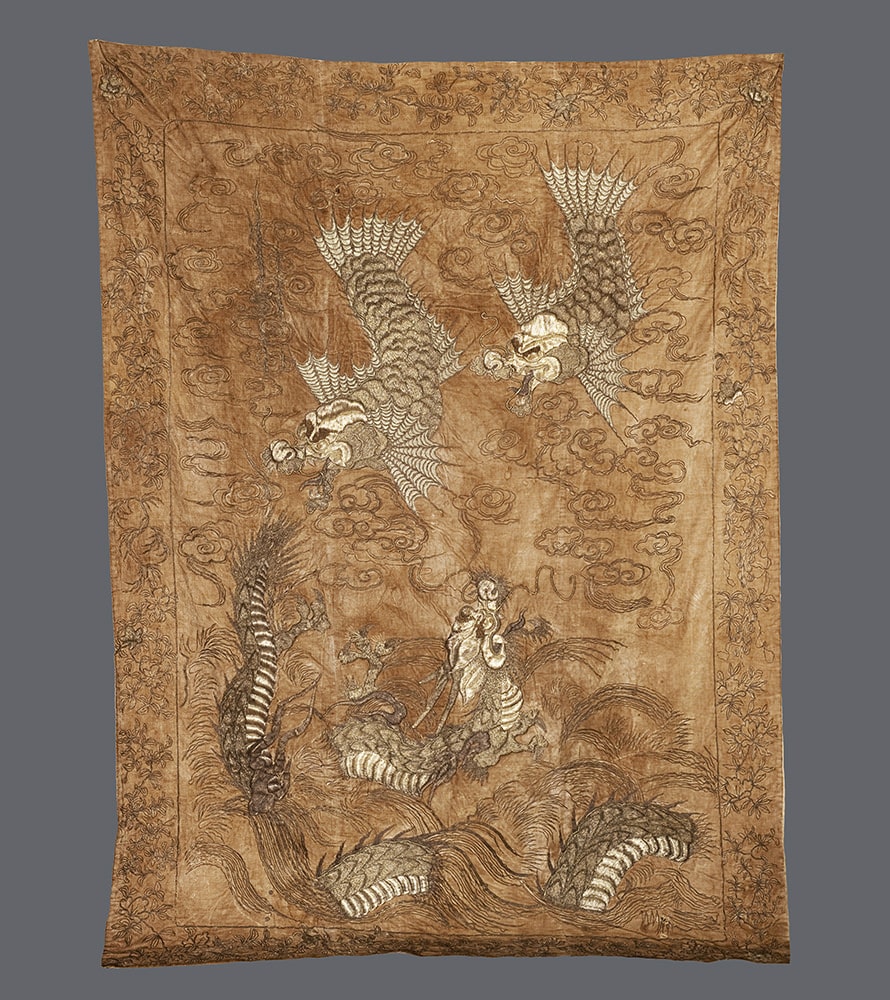 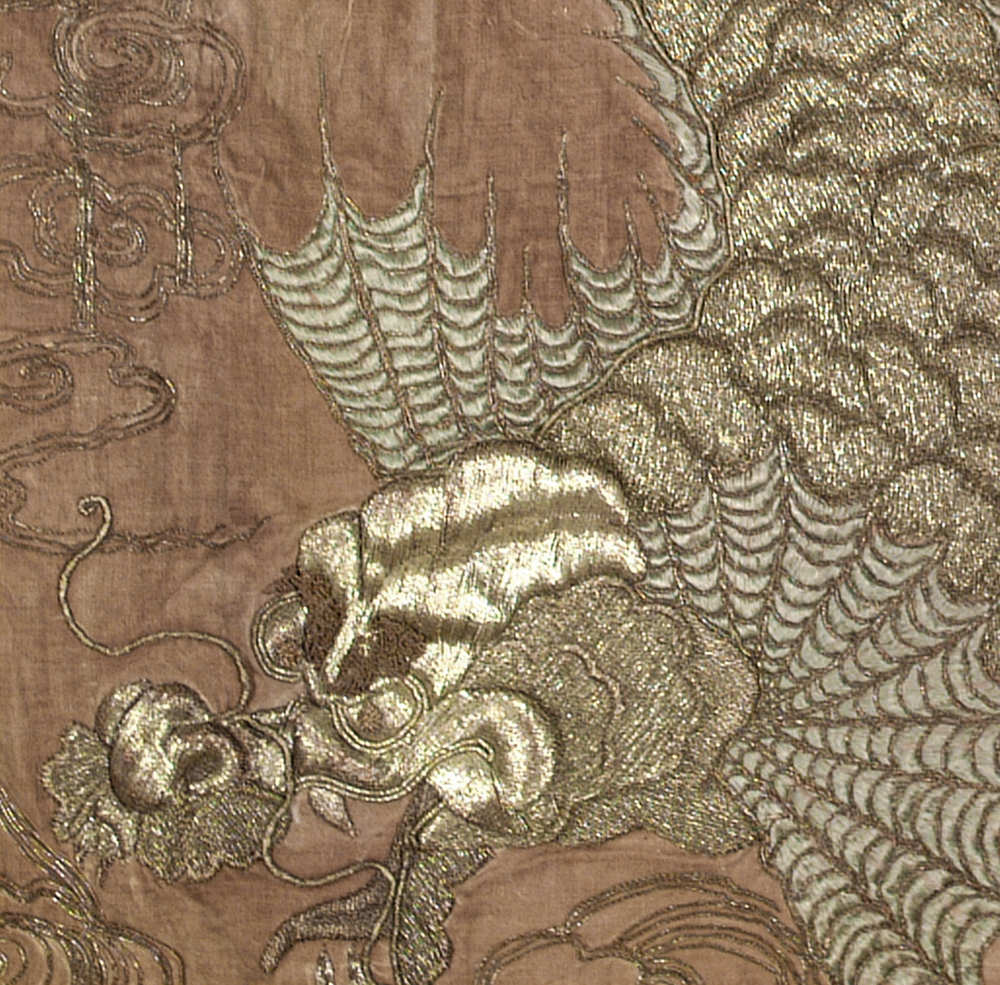 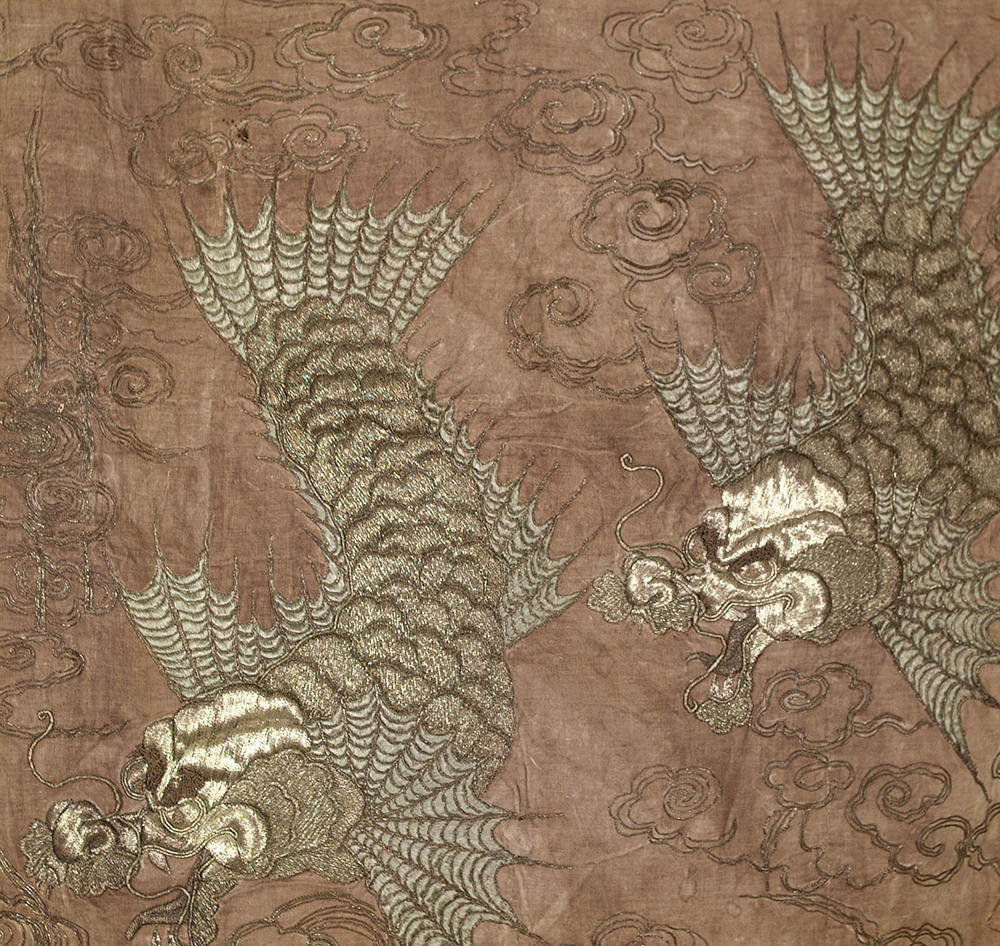 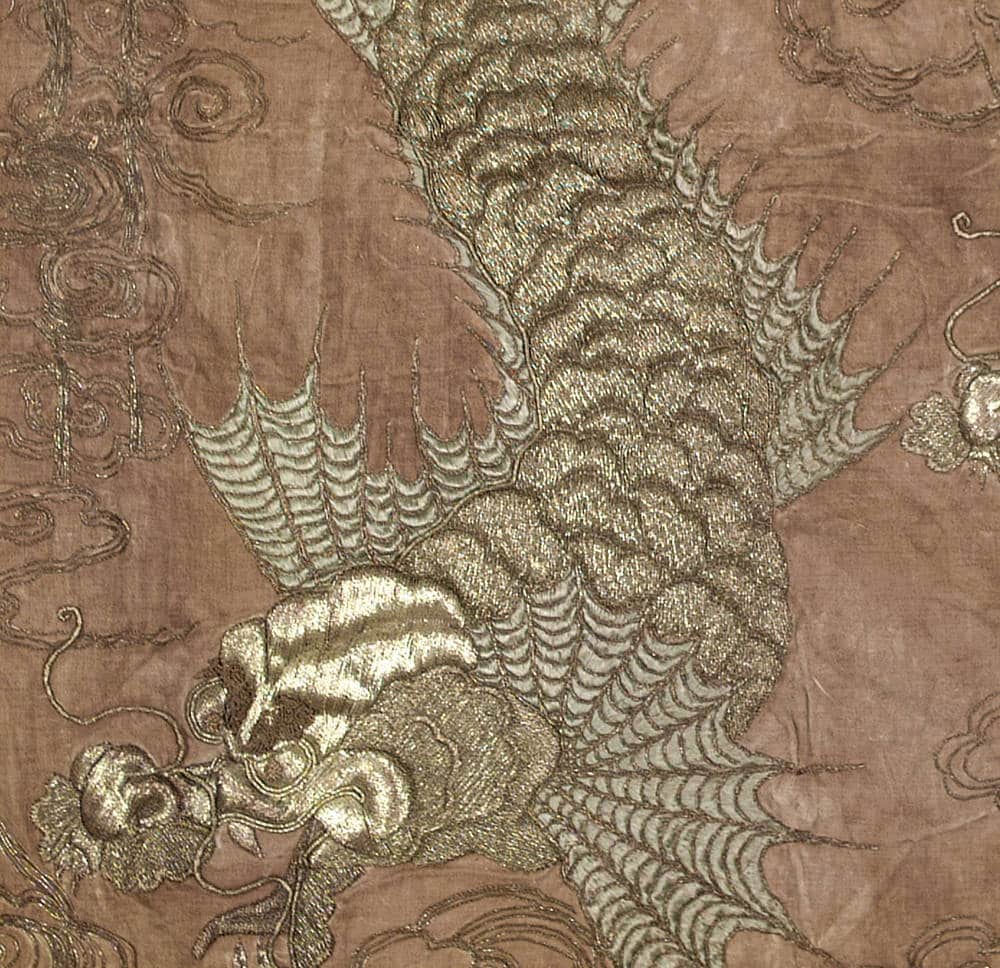 A rare embroidered hanging for Buddhist temple, with an unusual - velvet - background.  All the motifs were realized with relatively-coarse metallic couching: in the case of the dragons the couching is padded up to 1 cm in thickness, resulting in a 3-D effect.  The backing is of grayish-brown linen.  Very good condition for the age, with subtle areas of discoloration, as well as a few tiny damage spots and wears to the couching embroidery.  66" x 91".   The large dragon located at the base of this hanging � with it's gestured face and long undulating body - is a 'Ryu'-type dragon, the one most familiar in Japanese folklore.  The two short dragons descending from the sky above are perhaps a form of 'Hai-riyo' (winged dragon), the most evolved of the Japanese dragons.  The Japanese Emperor Hirohito traced his ancestry back 125 generations to Princess Fruitful Jewel, daughter of a Dragon King of the Sea.  Rather than inspiring terror as do European dragons, the dragon in Japan is the protector of Buddhist law, the symbol of imperial power, the guardian of the eastern direction, controller of sea and tempests, the embodiment of yin and yang , bringer of wealth and fortune, and a magical shape shifter. Japanese dragons are slender and long like a snake and are a composite of nine different animals: the head of a camel, horns or a deer, neck of a snake, abdomen of a cockle, ears of an ox, eyes of a hare, scales of a carp, paws of a tiger, and claws resembling those of an eagle. In addition it has whiskers, a bright jewel under its chin and a measure on the top of its head which enables it to ascend to heaven at will. The Japanese believe that all eastern dragons originated from Japan.  Japanese dragons have three toes, but legend has it that when the dragons began to leave Japan, they gained toes, for example, Chinese dragons have five. While Chinese dragons are lords of the rain, Japanese dragons are traditionally associated more with the sea than rain: the probable reason for this is the fact that Japan is less vulnerable to drought-related disasters as compared to China.  With the introduction of Buddhism into Japan, the dragon incorporated those attributes of a guardian deity, and was considered to be a protector of the land, its people and, their crops. A similar symbolism holds true for Japan's largest religious sect: Shintoism. In their mythology, the gods rode dragons to meetings at the Shrine of Izumo.  In Japanese legends, the dragon is often represented as the ruler of the waters, a being who controls water and weather. In this way, they protected the inhabitants from fire and pestilence, and were respected for their safeguarding of the crops. It is not surprising to find agricultural ceremonies in Japan that have been influenced by the dragon. There are also numerous fables that refer to the Dragon Palace under the Sea, while replicas are often found on sword guards ("Tsuba"), and on handles of temple bells. They are considered among the most significant beings in Japanese lore. You'll find plenty of dragon symbols in Buddhist temples and Shinto shrines, especially those located near bodies of water. It's very common for temple and shrine names to contain the word dragon in them. Dragon motifs and paintings adorn temples and shrines. Many of the ceilings have painted murals depicting various dragons. Dragon heads often adorn bells and other objects. Anna Jackson of the Victoria and Albert Museum states in her book "Japanese Textiles", p16: "Embroidery was also employed to pattern textiles in Buddhist temples: large embroidered hangings were often bought by visitors to Japan from impoverished temples forced to sell off their belongings in the Meiji period."  The old  velvet background is rare.   Velvet, loomed in Europe - was introduced to Japan by the Dutch and Portuguese during the 16th century. The large expanse of imported velvet required for item 2621 would have been very expensive during the Edo period, and was usually used sparingly: the Buddhist temples at that time were relatively wealthy.  The Osaka Castle Museum collection includes a late 16th century velvet jinbaori (a sleeveless jacket worn by samurai).  One of the earliest pictorial depictions of velvet use in Japan was in a woodblock print from the 1770's by Kitao Shigemasa, called Beauties of the Eastern Quarter: it depicts two fashionable Japanese women of the time, one wears European velvet, and another Indonesian batik.  In an essay on the manners and customs during the Edo period written by Kitagawa Morisada in 1853, there is a section on foreign-made cloth: for velvet, it states "Previously this was only available as an import and was not used by the common people, but today it has come into common use," showing that imported velvet had given way to a domestically produced variety by the mid-nineteenth century.

Price:
$
50,000.00
US
Available: Inquire
GalleryOrderingContactAbout UsGallery StatementNewsGlossary
Copyright © 2022 Yorke Antique Textiles
Thank you! Your submission has been received!
Oops! Something went wrong while submitting the form.